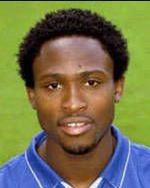 Celestine is alive and kicking and is currently 44 years old.
Please ignore rumors and hoaxes.
If you have any unfortunate news that this page should be update with, please let us know using this .

Does Celestine Babayaro Have the coronavirus?

Celestine Hycieth Babayaro (born 29 August 1978 in Kaduna) is a former Nigerian footballer. He was named after Pope Celestine V.
Babayaro was signed by Chelsea after being spotted by scout Lewis Durkin in April 1997. He moved for a transfer fee of £2.25 million, a club record paid for a teenager at the time. He made his debut in the UEFA Cup Winners' Cup against Slovan Bratislava, but an injury sustained in the 6–1 win over rivals Tottenham Hotspur in December 1997 ruled him out for the rest of the season. This meant he missed their victories in the 1998 Football League Cup Final and the 1998 UEFA Cup Winners' Cup Final. However, with Chelsea he went on to win the 1998 UEFA Super Cup, the FA Cup and Charity Shield in 2000, and reached the 2002 FA Cup Final.

He was also instrumental in Chelsea's memorable run in the 1999-2000 UEFA Champions League. It was to end in heartbreak for Babayaro as he was sent off in extra time against Barcelona, as they bowed out of the competition at the quarter final stage. He faced competition from Graeme Le Saux during his seven-year spell, but managed to play over 200 games for the London side. His acrobatic celebrations with backflips were noted and loved by the fans of the club.
Babayaro was part of Nigeria's squad for the 2004 African Nations Cup in Tunisia, but was controversially sent home, alongside Yakubu and Victor Agali for indiscipline. Although never officially announcing his retirement from international football, his final appearance from the national team was against Morocco in a group stage match.
Babayaro was acquitted of indecent assault in 1999. He later sued the Daily Star for a headline suggesting he had been charged with rape and won an apology and damages. He was declared bankrupt in 2011.