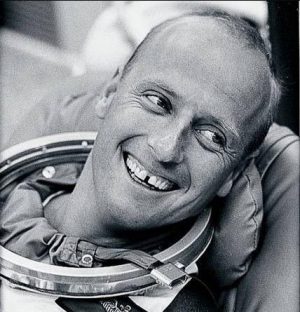 Charles "Pete" Conrad, Jr. (June 2, 1930 – July 8, 1999), (Capt, USN), was an American naval officer and aviator, aeronautical engineer, test pilot, and NASA astronaut, and during the Apollo 12 mission became the third man to walk on the Moon. He set an eight-day space endurance record along with his Command Pilot Gordon Cooper on the Gemini 5 mission, and commanded the Gemini 11 mission. After Apollo, he commanded the Skylab 2 mission (the first manned one), on which he and his crewmates repaired significant launch damage to the Skylab space station. For this, President Jimmy Carter awarded him the Congressional Space Medal of Honor in 1978.