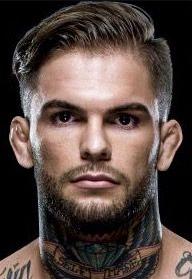 Cody is alive and kicking and is currently 30 years old.
Please ignore rumors and hoaxes.
If you have any unfortunate news that this page should be update with, please let us know using this .

Does Cody Garbrandt Have the coronavirus?

Cody Garbrandt (born July 7, 1991) is an American professional mixed martial artist signed to the Ultimate Fighting Championship (UFC). He is the reigning UFC Bantamweight Champion after becoming only the second fighter to defeat Dominick Cruz at UFC 207, handing him his first defeat in almost a decade. He is ranked #5 in the UFC pound for pound rankings.
Garbrandt made his promotional debut against Marcus Brimage on January 3, 2015, at UFC 182. He won the fight via TKO in the third round. Garbrandt faced Henry Briones on July 11, 2015, at UFC 189. He won the fight by unanimous decision. Garbrandt was expected to face John Lineker on February 21, 2016, at UFC Fight Night 83. However, Lineker pulled out of the fight during the week after contracting Dengue Fever and was replaced by Augusto Mendes. Garbrandt won the fight via TKO in the first round.

Garbrandt faced fellow undefeated prospect Thomas Almeida on May 29, 2016, at UFC Fight Night 88. He won the fight by knockout in the first round and also earned a Performance of the Night bonus. Garbrandt next faced Takeya Mizugaki on August 20, 2016, at UFC 202. He won the fight via TKO in the opening minute of the first round.
During Garbrandt's run with the MMA promotion Pinnacle FC, he met and began dating a woman named Danny Pimsanguan. The couple eventually married in July 2017. In October, the couple announced they were expecting their first child. In March 2018, the couple announced the birth of their son, Kai Fisher Garbrandt.