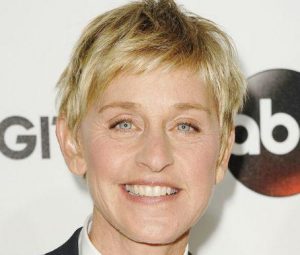 Ellen is alive and kicking and is currently 64 years old.
Please ignore rumors and hoaxes.
If you have any unfortunate news that this page should be update with, please let us know using this .

Does Ellen DeGeneres Have the coronavirus?

Ellen DeGeneres's mother, Betty DeGeneres, is still alive and kicking at the age of 92.

With her own talk show, Ellen DeGeneres is one of America's most well-known comedians, also serving as a prominent gay/lesbian role model. Born on January 26, 1958, in Metairie, Louisiana, Ellen DeGeneres hit it big as a stand-up comedian before starring on her own sitcom, Ellen. In 1997, she came out as gay, and became a staunch advocate of LGBT rights. She has been the host of her own award-winning talk show, The Ellen DeGeneres Show, since 2003, and married girlfriend Portia de Rossi in 2008.
Forbes estimated DeGeneres' 2017 earnings at US$77 million. In 2015, she was named the 50th most powerful woman in the world by Forbes and number two on the World Pride Power list. By July 30, DeGeneres has more than 71 million followers on Twitter and 47 million on Instagram, making her the sixth most followed user on Twitter and the 28th most followed user on Instagram.

She is a fan of the National Football League and has shown particular support for the New Orleans Saints and the Green Bay Packers. In 2011, she attended a Saints practice dressed as Packers Hall of Famer Don Hutson.
In 1997, DeGeneres came out as lesbian. The disclosure of her sexual orientation sparked intense interest by American tabloids. The contentiousness of the media coverage stunted DeGeneres' professional career and left her "mired in depression". In her book Love, Ellen, DeGeneres' mother, Betty DeGeneres describes being initially shocked when her daughter came out, but she has since become one of her strongest supporters; she is also an active member of Parents & Friends of Lesbians and Gays (PFLAG) and spokesperson for the Human Rights Campaign's Coming Out Project.
The same year she came out, DeGeneres started a romantic relationship with actress Anne Heche that lasted until August 2000. From 2000 to 2004, DeGeneres maintained a close affair with actress/director/photographer Alexandra Hedison. The couple appeared on the cover of The Advocate after their separation had already been announced to the media.
Since 2004, DeGeneres has had a relationship with Portia de Rossi. After the overturn of the same-sex marriage ban in California, DeGeneres and de Rossi were engaged, and married in August 2008, at their home in Beverly Hills, California, where they live with their four dogs and three cats. The passage of Proposition 8 cast doubt on the legal status of their marriage, but a subsequent California Supreme Court judgment validated it because it occurred before November 4, 2008. On August 6, 2010, de Rossi filed a petition to legally change her name to Portia Lee James DeGeneres. The petition was granted on September 23, 2010.