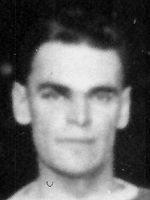 Hubert John Francis "Frank" Peters (June 5, 1902 – July 17, 1973), nicknamed Frosty Peters, was a professional ice hockey player who played 43 games in the National Hockey League. Born in Rouses Point, New York, the son of Hubert Peters, a printer, he played for the New York Rangers. Peters holds a record having played the second most games in the NHL without registering a point, at 44 behind Gord Strate, who played in 61.