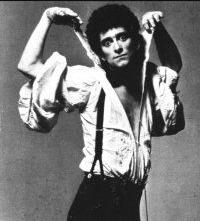 Gary passed away on October 25, 1985 at the age of 33 in Wembley, London, England. Gary's cause of death was overdose of morphine & alcohol.

Gary Frederick Holton was an English singer-songwriter, musician and actor from London. He was the frontman of the band Heavy Metal Kids, he worked with Casino Steel (1981-84), and played the part of Wayne in the UK television comedy Auf Wiedersehen, Pet (1983-85). Holton died from an overdose of morphine combined with alcohol in 1985.