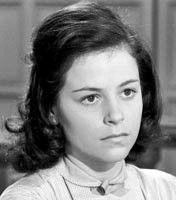 Jana Taylor (July 27, 1943 – April 27, 2004) was an American actress best known for her role as Angie Costello on the ABC soap opera General Hospital.
She started her career in the 1961 film A Cold Wind in August as Alice. Also in 1961, Taylor was uncredited as Elsa Scheffler in 1961's Judgment at Nuremberg. She was Abigale in 1967's Hells Angels on Wheels. Taylor's last film was 1984's Dreamscape as Mrs. Webber. Her biggest role was Angie Costello in the ABC soap opera General Hospital from 1963 to 1965 as an original cast member. Taylor would guest star in such television series as Perry Mason, The Gallant Men, Get Smart, Run for Your Life, The Wild Wild West, and The Interns. She had a recurring role on Make Room for Granddaddy as Susan McAdams Williams. Taylor ended her acting career with a guest appearance back on General Hospital on April 1, 1993, for its 30th anniversary.

Taylor married Michael R. Sinclair in 1969 and divorced him in 1970. She then married Louis Michael Perretta of Italian American descent in 1976; together they had one son, Michael Perretta, known professionally as Evidence, on December 10, 1976. Louis Perretta died in 1985. Taylor died on April 27, 2004, of cancer in Venice, Los Angeles.