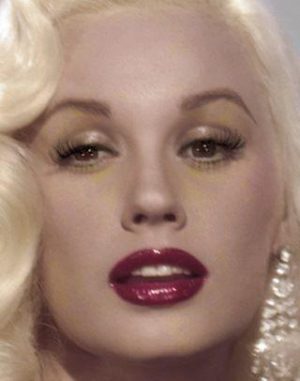 Mamie is alive and kicking and is currently 91 years old.
Please ignore rumors and hoaxes.
If you have any unfortunate news that this page should be update with, please let us know using this .

Does Mamie Van Doren Have the coronavirus?

Mamie Van Doren is an American actress, model, singer, and sex symbol who is known for being one of the first actresses to recreate the look of Marilyn Monroe. Van Doren is perhaps best remembered for the rock 'n' roll, juvenile delinquency, exploitation movie Untamed Youth, and other films of this calibre.
Van Doren has been married five times. In 1949, she married sportswear manufacturer Jack Newman; she divorced him later that same year. Her second marriage was to bandleader, composer and actor Ray Anthony whom she married in 1955. They had one son, Perry Ray Anthony, born March 18, 1956.

The couple divorced in 1961. When Van Doren's early 1960s, highly publicized, on-again off-again engagement to baseball player Bo Belinsky ended in 1964, she married baseball player Lee Meyers in 1966. They divorced in 1968. Her fourth marriage was to businessman Ross McClintock in 1972. They met while working on President Nixon's re-election campaign; the marriage was annulled in 1973. Since 1979, she has been married to Thomas Dixon, an actor and dentist.
In her autobiography, Van Doren acknowledged that she had numerous affairs with celebrities. These included Clark Gable, Howard Hughes, Johnny Carson, Elvis Presley, Burt Reynolds, Jack Dempsey, Steve McQueen, Clint Eastwood, Johnny Rivers, Robert Evans, Eddie Fisher, Warren Beatty, Tony Curtis, Steve Cochran and Joe Namath.
Claiming fidelity to each lover, she said about Hollywood life, "I don't wear panties anymore - this startles the Hollywood wolves so much they don't know what to pull at, so they leave me alone."