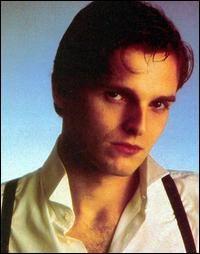 Miguel is alive and kicking and is currently 66 years old.
Please ignore rumors and hoaxes.
If you have any unfortunate news that this page should be update with, please let us know using this .

Does Miguel Bosé Have the coronavirus?

Miguel Bosé is a Spanish musician who was born on April 3, 1956. Propelled by his famous family and their friends, in 1971, Bosé started a career as an actor, participating in various movies. He quickly won spots on the basis of his talent and good looks alone, rather than his name, and he did study serious acting as well as dancing and singing. However, he did not make that many films, and in 1975 he decided a career change was due and started exploring his talents as a singer. With the assistance of Camilo Blanes he recorded his first singles. Two years later, in 1977, Bosé signed a contract with CBS Records, and he remained with them until 1984.
Between 1977 and 1982, Bosè was a major teen idol in Italy, Spain, Southern Europe and in all Latin America. He had 7 top ten hits in a disco/new wave trend that earned him a secure spot in every televised song festival held in the aforementioned countries, but, by 1983, his star had severely waned in Italy, and he rarely performed there again until the 2000s, retreating to Latin American markets instead.

On March 20, 2007, to celebrate his 30 years as a singer, he released Papito, an album that contains remakes of his previous songs, re-interpreted in duets with Juanes, Alejandro Sanz, Fangoria, Ivete Sangalo, Laura Pausini, Shakira, Julieta Venegas, Ricky Martin, Amaia Montero (past member of the Spanish band La Oreja de Van Gogh), and Michael Stipe from R.E.M., along with many other singers. Three singles were released off Papito: the first is a re-make of his hit "Nena", featuring Mexican superstar Paulina Rubio; the second was "Morena Mía", with Mexican pop diva Julieta Venegas. The third single "Como un lobo" featured his niece Bimba Bosé. "Nena" was by far the most successful single off the album. It was nominated for a Latin Grammy for best song and became the best selling download of Spain in 2007. In the same year, Bosé was awarded the Billboard Latin Music Lifetime Achievement Award.
In 2008, Colombian President Álvaro Uribe offered him Colombian citizenship because of his efforts towards peace in Colombia, including his participation in two concerts in 2008. On March 16, 2010 he received Colombian citizenship during a ceremony in the presidential palace, Casa de Nariño.