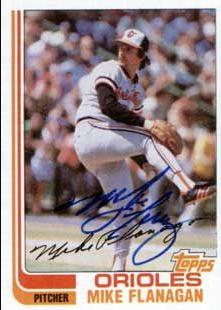 Michael Kendall Flanagan (December 16, 1951 – August 24, 2011) was an American left-handed pitcher, front office executive, and color commentator. With the exception of four years with the Toronto Blue Jays (1987–90), he was with the Baltimore Orioles for his entire career in Major League Baseball (MLB).