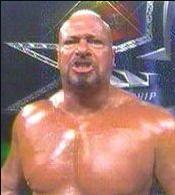 Alfred Dobalo (October 15, 1955 – June 14, 2013), best known by his ring name Al Green, was an American professional wrestler who performed in North America, Europe, and Japan under a variety of gimmicks, including Rage one half of the team The Wrecking Crew with Fury (Marc Laurinaitis), Blade one half of the Master Blasters with Steel (Kevin Nash) and the Dog in World Championship Wrestling at the turn of the millennium.