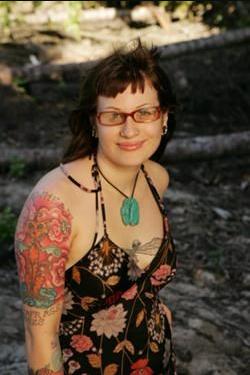 Cassandra passed away on January 8, 2021 at the age of 40 in New Orleans, Louisiana, USA. Cassandra's cause of death was cancer.

Born and raised in Waukesha, Wisconsin, Angie Jakusz attended Mukwonago High School. She then spent time in San Francisco and New York before moving permanently to New Orleans.As of Survivor: Palau, Jakusz worked as a bartender while creating her art (she paints watercolors and uses found objects in her creations). She previously worked as an ink lab technician and has also worked in a tattoo shop. She currently has 11 colored tattoos. She describes herself as vivacious, gracious and anomalous. Her favorite hobbies include painting, reading and heckling. Her hero is a co-worker who, after 20 years at the bar, decided to return to school to study marine biology.Her birth date is March 27, 1980