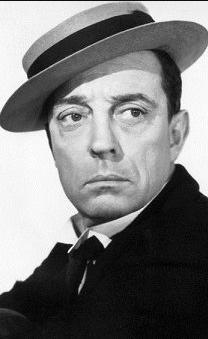 Buster passed away on February 1, 1966 at the age of 70 in Los Angeles, California, USA. Buster's cause of death was lung cancer.

Joseph Frank "Buster" Keaton was an American actor, director, producer, writer, and stunt performer. He was best known for his silent films, in which his trademark was physical comedy with a consistently stoic, deadpan expression, earning him the nickname "The Great Stone Face". Keaton was recognized as the seventh-greatest film director by Entertainment Weekly. In 1999, the American Film Institute ranked Keaton the 21st greatest male star of Classic Hollywood Cinema. Critic Roger Ebert wrote of Keaton's "extraordinary period from 1920 to 1929, [when] he worked without interruption on a series of films that make him, arguably, the greatest actor-director in the history of the movies". His career declined afterward with a dispiriting loss of his artistic independence when he was hired by MGM, which resulted in a crippling alcoholism that ruined his family life. He recovered in the 1940s, remarried, and revived his career to a degree as an honored comic performer for the rest of his life, earning an Academy Honorary Award in 1959.
On May 31, 1921, Keaton married Natalie Talmadge, sister of actresses Norma Talmadge and Constance Talmadge. She co-starred with him in Our Hospitality. The couple had sons Joseph, called Buster Jr. (June 2, 1922 – February 14, 2007), and Robert (February 3, 1924 – July 19, 2009), both of whom later took the surname Talmadge.

After the birth of Robert, the relationship began to suffer. Talmadge decided not to have more children, and this led to the couple staying in separate bedrooms. Her financial extravagance was another factor in the breakdown of the marriage, as she would spend up to a third of his salary on clothes. Keaton dated actress Dorothy Sebastian beginning in the 1920s and Kathleen Key in the early 1930s. After attempts at reconciliation, Talmadge divorced him in 1932, taking his entire fortune and refusing to allow any contact between him and his sons, whose last name she changed to Talmadge. Keaton was reunited with them about a decade later when his older son turned 18.
With the failure of his marriage and the loss of his independence as a film-maker, Keaton lapsed into a period of alcoholism. In 1926, he spent $300,000 to build a 10,000-square-foot (930 m2) home in Beverly Hills designed by architect Gene Verge, Sr., which was later owned by James Mason and Cary Grant. Keaton was briefly institutionalized, according to the Turner Classic Movies documentary So Funny it Hurt. He escaped a straitjacket with tricks learned from Harry Houdini. In 1933, he married his nurse Mae Scriven during an alcoholic binge about which he afterwards claimed to remember nothing. Scriven claimed that she didn't know Keaton's real first name until after the marriage. She filed for divorce in 1935 after finding Keaton with Leah Clampitt Sewell, the libertine wife of millionaire Barton Sewell., in a hotel in Santa Barbara. They divorced in 1936 at great financial cost to Keaton.
On May 29, 1940, Keaton married Eleanor Norris (July 29, 1918 – October 19, 1998), who was 23 years his junior. She has been credited with saving his life by stopping his heavy drinking and helping to salvage his career. The marriage lasted until his death. Between 1947 and 1954, they appeared regularly in the Cirque Medrano in Paris as a double act. She came to know his routines so well that she often participated in them on TV revivals.
Keaton died of lung cancer on February 1, 1966, aged 70, in Woodland Hills, California. Despite being diagnosed with cancer in January 1966, he was never told he was terminally ill or that he had cancer. Keaton thought that he was recovering from a severe case of bronchitis. Confined to a hospital during his final days, Keaton was restless and paced the room endlessly, desiring to return home. In a British television documentary about his career, his widow Eleanor told producers of Thames Television that Keaton was up out of bed and moving around, and even played cards with friends who came to visit the day before he died. He was buried at Forest Lawn Memorial Park Cemetery in Hollywood Hills, California.