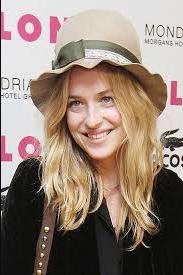 Dakota passed away on December 10, 2008 at the age of 30 in Los Angeles, CA. Dakota's cause of death was car accident.

Dakota Culkin was born on June 15, 1978 in New York City, New York, USA. She is known for her work on Lost Soul (2009) and Om Nom Stories (2011). Culkin worked in production design, most recently on the film "Lost Soul". "She was a real sweetheart and excited to learn all she could about the film business," the film's director, Dana Schroeder tells. "She was also humble about her background and preferred that she remain incognito. She was a real pleasure to have on the production set. We will miss her."
She was struck by a car when she stepped off the curb and in front of a moving vehicle on the west side of Los Angeles on December 9, 2008 in the evening. She was taken to UCLA Hospital with massive head trauma and died from her injuries December 10, 2008 in the afternoon.

According to the LAPD, the driver of the car stopped, tried to help Culkin and identified himself to law enforcement. Detectives determined he was not under the influence of drugs or alcohol and that no crime was committed.