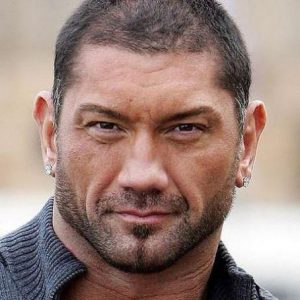 Dave is alive and kicking and is currently 53 years old.
Please ignore rumors and hoaxes.
If you have any unfortunate news that this page should be update with, please let us know using this .

Does Dave Bautista Have the coronavirus?

David Michael "Dave" Bautista Jr. is an American actor and former professional mixed martial artist and professional wrestler, signed to WWE under the ring name Batista.
He is a six-time world champion, winning the World Heavyweight Championship four times and the WWE Championship twice. He is the longest-reigning consecutive days World Heavyweight Champion in WWE history, and has won the World Tag Team Championship three times and the WWE Tag Team Championship once (with Rey Mysterio). He was the winner of the 2005 Royal Rumble match and went on to headline WrestleMania 21, one of the top five highest-grossing pay-per-view events in pro wrestling history. Batista also won the 2014 Royal Rumble match, after which he headlined WrestleMania XXX.

He has numerous tattoos, including a large dragon on his back, red Kanji lettering on his upper left biceps which says "Angel" in tribute to his former wife Angie, a signature design on his upper right biceps, and a small sun on his stomach which encircles his belly button. He also has a tattoo on his arm of the flags of the Philippines and Greece. While taking time off due to injury in 2009, Bautista had both upper arms covered in large, tribal style tattoos, including the word "DC soldier" on his right bicep.