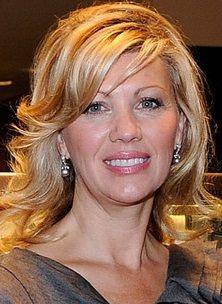 Debbie is alive and kicking and is currently 63 years old.
Please ignore rumors and hoaxes.
If you have any unfortunate news that this page should be update with, please let us know using this .

Does Debbie Osmond Have the coronavirus?

Debra Lee Glenn was born in Billings, Montana on February 26th, 1959. She is the baby of the family. She has a brother name Mike and a sister name Pam. Debbie's parents are Dr. Avery and Marge Glenn. When Debbie was a teenager, she use to be a "David Cassidy lover!". She was a cheerleader at Provo High School and graduated in 1977. She stands at 5" 4' and weights 104 pounds. Debbie has sunshine hair and blue eyes. Her voice is Barbie-like. Very dollish. She is a pisces. "I'm a rather shy person". She has a favorite Louis Vuitton shoulder purse; brown and square-shaped. Debbie made a cameo in the comedy called "Goin' Coconuts". She is an excellent cook, and she sews a lot of her clothes. Her favorite color is blue and although her heart was set on blue for her weddiing, her selfish then-fiancee insisted on purple, and she tolerated a compromise of --- her wedding day --- being purple and pink. Debbie met her future husband when she was 15 years old. On a double-date with him, she ribbed and teased her future-husband because she was interested in him, and was glad that her then-competition was being "kind of cold that night, kind of being a real stinker". Debbie Glenn became Debra Glenn Osmond on May 8th, 1978. Her sparkly wedding dress is so lovely. The head dress was round with eyelets on the trim and the veil reached down pass the floor and spread outward with pretty flowers at the trims, all the way down from the top to the bottom. The neckline is high and the long sleeves are puffy, with eyelet flowers at the trims. "I'll be with him and do what he wants. I might takes some home study courses; but, I'd like to stay home and be a wife and raise a family." Debbie's hair was softly styled with curls to the left side and her make-up was natural. Her reception dress was long and white with long sleeves that had ruffles at the end of it. The neckline was ruffled rounded. Her nails were slim, long and beige. She hoped that she had a "couple of girls to help me". She now has 5 sons. No girls. Even though Debbie loves her family, she is often sadden that she never had a daughter. Debbie wants another child; but, once again her husband was selfish and refused. Yes, she has kicked her husband out of the house a few times. Some of her favorite things are Mexican food, 7-Up, soft ballads, cherry pie, "chocolate, chocolate and MORE chocated!", Carnations, the PF Chang restuarant, books on child development, interior design and church stuff. Her favorite author is Cleon Skousen. Her hobby is sewing, tole painting and wall papering. Debbie's favorite movie is "My Fair Lady" and "Somewhere In Time". She likes to snack on vegetables and dip. The one thing she hates is doing laundry. "It NEVER ends!" Her favorite season is fall and she likes the Tower Of Terror ride at Disney World. Debbie is such a pretty girl and doesn't need cosmectic surgery or overdone make-up. Her beauty is lovely and natural. She uses the skin care line called Melaleuca and the Victoria Principal line. It's somewhat expensive; but, Debbie surely can afford it. Even at 50, Debbie's skin is still smooth and clear. If Debbie was granted a wish, she would wish for "all the fear and contention in the world would go away".