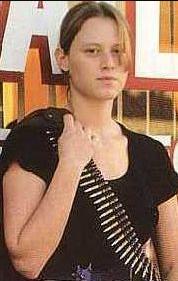 Domino passed away on June 27, 2005 at the age of 35 in Los Angeles, California. Domino's cause of death was heroin overdose.

Domino Harvey's father, Laurence Harvey, died on November 25, 1973 as he was 45 years old. His cause of death was stomach cancer.

Domino Harvey's mother, Paulene Stone, is still alive and kicking at the age of 81. She is British and has had a career as a fashion model, cover girl.

Domino Harvey was an English bounty hunter in the United States, notable within that field for being female and from a well-to-do background. Harvey's fame was increased posthumously by the 2005 release of the film Domino, which was loosely based on her life, with Harvey portrayed by Keira Knightley.