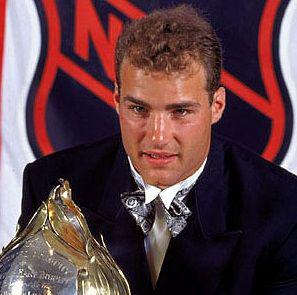 Eric is alive and kicking and is currently 49 years old.
Please ignore rumors and hoaxes.
If you have any unfortunate news that this page should be update with, please let us know using this .

Eric Bryan Lindros (/ˈlɪndrɒs/; born February 28, 1973) is a Canadian former professional ice hockey player. Lindros played junior hockey in the Ontario Hockey League (OHL) for the Oshawa Generals prior to being chosen first overall in the 1991 NHL Entry Draft by the Quebec Nordiques. He refused to play for the Nordiques and was eventually traded to the Philadelphia Flyers in June 1992 in exchange for a package of players and draft picks including Peter Forsberg. During his OHL career, Lindros led the Generals to a Memorial Cup victory in 1990. Prior to being drafted in 1991, Lindros captured the Red Tilson Trophy as the Most Outstanding Player in the OHL, and also was named the CHL Player of the Year. Lindros was born in London, Ontario, but grew up in Toronto.