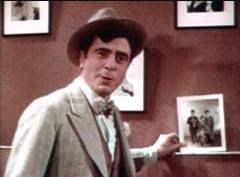 George Givot (February 18, 1903 – June 7, 1984) was an American comedian and actor on Broadway and in vaudeville, movies, television and radio. He was known for speaking in a comedic fake Greek dialect and was styled the "Greek Ambassador of Good Will". His best known movie role may be as the voice of Tony in the Disney film Lady and the Tramp.