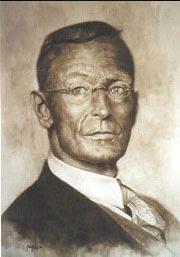 Hermann passed away on August 8, 1962 at the age of 85 in Montagnola, Ticino, Switzerland.

Hermann Karl Hesse was a German-born Swiss poet, novelist, and painter. His best-known works include Steppenwolf, Siddhartha, and The Glass Bead Game, each of which explores an individual's search for authenticity, self-knowledge and spirituality. In 1946, he received the Nobel Prize in Literature.