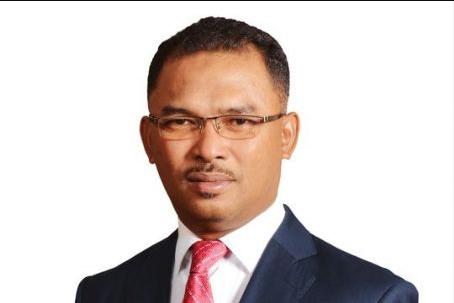 Idris is alive and kicking and is currently 56 years old.
Please ignore rumors and hoaxes.
If you have any unfortunate news that this page should be update with, please let us know using this .

Does Idris Haron Have the coronavirus?

Datuk Seri Utama Ir. Haji Idris bin Haron (born 13 May 1966 at Asahan, Melaka) is a Malaysian politician and current Chief Minister of Melaka. He was a member of the Parliament of Malaysia from 2004 to 2013 and became a deputy minister in 2008. He left federal politics in 2013, winning election to the Malacca State Legislative Assembly and becoming the state's chief minister. He is a member of the United Malays National Organisation (UMNO) party in the Barisan Nasional coalition. Internationally, he is the President of World Assembly of Youth.Background Idris is married with three children. For his primary education, he went to four different schools: Sekolah Rendah Kebangsaan (SRK) Simpang Bekoh, SRK Belading, SRK Asahan from 1973 to 1977 and SRK Kubu from 1977 till 1978. He received his secondary education at Sekolah Menengah Sains Muzaffar Syah (MOZAC), Melaka from 1979 till 1983. At MOZAC, he became the school's best student. He later pursued his tertiary education at University of Texas at El Paso and received a Bachelor of Science in Electrical Engineering . His ambition was to become a pilot but he changed his mind to become an electrical engineer instead during interviews.He was the Chairman of the Malaysian Student Conference until he graduated in 1989. In 1993 he participated in an intensive Japanese language training at ITM before pursuing further studies in a technical field at the Kensyu Centre in Tokyo, Japan. He has trained by the Kandenko Corporation Ltd for six months in Tokyo, Japan, in the field of electrical distribution systems. Before his election to Parliament, Idris was chairman of the Alor Gajah district council.Political career Idris was elected to federal parliament in the 2004 election for the newly created seat of Tangga Batu. In his first year in Parliament, Idris made international news for complaining that the outfits worn by stewardesses on Malaysia Airlines would result in male passengers sexually harassing the stewardesses. After the 2008 election, Idris was appointed a Deputy Minister for Higher Education in the government of Abdullah Ahmad Badawi.In the 2013 election, Idris vacated his federal parliamentary seat to contest the seat of Sungai Udang in the Malacca State Legislative Assembly. The move was far from a demotion: it was carried out by the Barisan Nasional coalition to install him as the Chief Minister of Malacca, replacing Mohd Ali Rustam. The coalition retained its majority in the state assembly and Idris was sworn in as Malacca's tenth Chief Minister.Chief Minister of MelakaHe continued the legacy of his predecessor, Mohd Ali Rustam, but with opposing style by establishing "Melaka Maju- Fasa Dua" (Progressive Melaka-Phase Two). He set up four principles under this umbrella.First, to raise Melaka's quality of products and services to the highest possible level, exceeding the expectations of customers who comprise investors, tourists and the people in the state.Second, system and mechanism of products and services in Melaka must be sustainable.Third, establishing conducive environment for investors andfourth, to maintain the motivation of Melaka's workforce to produce top-notch quality. He also works under the word "Berkat, Tepat, Cepat" (Blessed, Fast, Accurate).Under his leadership, Melaka obtained its biggest investment ever in her history of RM 4.38 billion in 2014. The waterfront of Melaka, stretching as far as 73 kilometers, were also upgraded for future beach port. He launched "Don't Mess With Melaka", modeled after a 1986 "Don't Mess With Texas" campaign in a bid against littering, crime and social ills. The goal of the campaign was to ensure the state remained one of the cleanest in the country, following reports that cleanliness levels had deteriorated. The statewide campaign used T-shirt and billboard advertising. The campaign's slogan drew criticism on the basis that it could seem to promote gangsterism. Idris defended the slogan, saying that it was a way to grasp the attention of youths through creative and aggressive marketing. He also initiated the RM40 billion, 609-acre mega-project Melaka Gateway, and revived the rarely used Malacca International Airport with flights to Penang by Malindo Air. Under his tenure, Malacca was Malaysia's first state to put electric buses in service.He led the state visit to among the wealthiest state of China, Guangdong. He witnessed the signing of a memorandum of understanding (MOU) between Melaka and Guangdong to boost both state economy and tourism sector.On 23 November 2015, Chinese Prime Minister Li Keqiang and another 100 delegates made a visit in order to strengthen the relationship between Melaka and China.On 8 August 2016, he made a scandalous remark that the United States of America is planning to kill the malays via the civil action taken by the Department of Justice against 1MDB's known associates. It is alleged that he made the statement in order to defend his Umno President. However, that remark received terrible reaction from the public due to its absurdity, prompting the US Embassy in Kuala Lumpur to issue dismissive response and an Umno colleague to publicly claim that he does not know what was in the Chief Minister's head when he made those remarks.