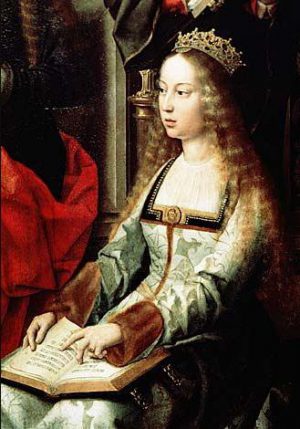 Isabella I of Castile Death

Isabella I of Castile Birthday and Date of Death

Is Isabella I of Castile's father, John II of Castile, dead or alive?

John II of Castile's information is not available now.

Is Isabella I of Castile's mother, Isabella of Portugal, dead or alive?

Isabella I of Castile - Biography

Isabella I, also known as Isabella the Catholic, was queen of Castile and León. She and her husband, Ferdinand II of Aragon, brought stability to the kingdoms that became the basis for the unification of Spain. Later the two laid the foundations for the political unification of Spain under their grandson, Holy Roman Emperor Charles V. After a struggle to claim her right to the throne, she reorganized the governmental system, brought the crime rate to the lowest it had been in years, and pulled the kingdom out of the enormous debt her brother had left behind. Her reforms and those she made with her husband had an influence that extended well beyond the borders of their united kingdoms. Isabella and Ferdinand are known for completing the Reconquista, ordering conversion or exile of their Muslim and Jewish subjects and financing Christopher Columbus' 1492 voyage that led to the opening of the "New World". Isabella was granted the title Servant of God by the Catholic Church in 1974.