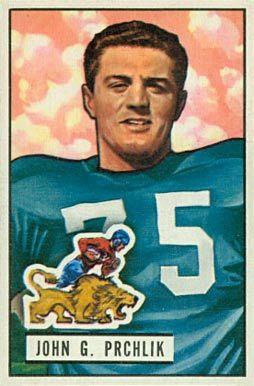 John George Prchlik (July 20, 1925 – December 31, 2003) was a professional American football defensive lineman in the National Football League. He was born into a Czech immigrant community and didn't learn English until he went to school yet he excelled at academics and athletics at Cleveland West Technical High School. Evidence to his leadership skills and the wartime situation he was nominated for an officers training program. He could have been placed in any university in the country. Randomly he was assigend to the ROTC program at Yale University, where among others his classmates included George Herbert Bush and William F. Buckley, a huge cultural shift from W. 44th St. in Cleveland. He served as an Ensign on the aircraft carrier, the USS White Plains in the Pacific Theater in the middle of his college career. He returned to New Haven, and lettered in football, wrestling, and crew and married his wife, Patricia Hallihan, a local resident in 1948. After playing college football at Yale, Prchlik was drafted by the Boston Yanks in the 30th round (277th overall) in his Junior year of the 1947 NFL Draft. He played five seasons for the Detroit Lions including their 1952 and 1953 Championship seasons. In the off season, he worked towards his Law degree and graduated from Wayne State University in 1952.