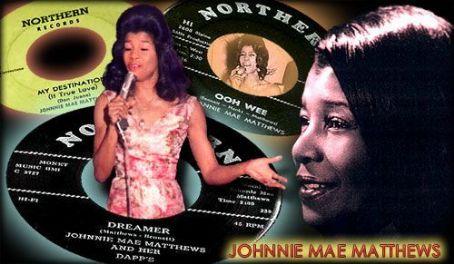 Johnnie Mae Matthews (December 31, 1922 – January 6, 2002) was an American blues and R&B singer, songwriter, and record producer from Bessemer, Alabama. Known as the “Godmother of Detroit Soul” and as the first African American female to own and operate her own record label (Northern Recording Company) she was an early influence on the careers of many of the now-famous recording stars who began their careers in Detroit, Michigan such as Otis Williams, David Ruffin, and Richard Street of the Temptations, Jimmy Ruffin, Joe Hunter of the Funk Brothers Band, Richard Wylie, Norman Whitfield, Berry Gordy, founder of Motown Records, Timmy Shaw, Barbara Lewis, Bettye LaVette and many more.