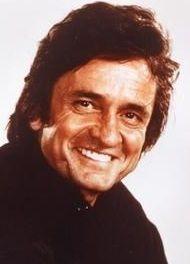 John passed away on September 12, 2003 at the age of 71 in Baptist Hospital, Nashville, Tennessee, USA. John's cause of death was diabetes complications.

Johnny "J.R." Cash was an American singer-songwriter, guitarist, actor and author who was widely considered one of the most influential musicians of the 20th century. Although primarily remembered as a country music icon, his genre-spanning songs and sound embraced rock and roll, rockabilly, blues, folk, and gospel. This crossover appeal won Cash the rare honor of multiple inductions in the Country Music, Rock and Roll and Gospel Music Halls of Fame.
On July 18, 1951, while in Air Force training, Cash met 17-year-old Italian-American Vivian Liberto at a roller skating rink in her native San Antonio. They dated for three weeks until Cash was deployed to Germany for a three-year tour. During that time, the couple exchanged hundreds of pages of love letters. On August 7, 1954, one month after his discharge, they were married at St. Ann's Roman Catholic Church in San Antonio. The ceremony was performed by her uncle, Vincent Liberto. They had four daughters: Rosanne, Kathy, Cindy, and Tara. In 1961, Johnny moved his family to a hilltop home overlooking Casitas Springs, California, a small town south of Ojai on Highway 33. He had previously moved his parents to the area to run a small trailer park called the Johnny Cash Trailer Park.

Johnny's drinking led to several run-ins with local law enforcement. Liberto later said that she had filed for divorce in 1966 because of Cash's severe drug and alcohol abuse, as well as constant touring, affairs with other women, and his close relationship with June Carter. Their four daughters were then raised by their mother.
Cash met singer June Carter, of the famed Carter Family while on tour, and the two became infatuated with each other. In 1968, 13 years after they first met backstage at the Grand Ole Opry, Cash proposed to June, during a live performance in London, Ontario. The couple married on March 1, 1968, in Franklin, Kentucky. They had one child together, John Carter Cash, born March 3, 1970. He was the only son for both Johnny and June. In addition to having his four daughters and John Carter, Cash also became step-father to Carlene and Rosie; June’s daughters from her first two marriages.
Cash and Carter continued to work, raise their child, create music, and tour together for 35 years until June's death in May 2003. Throughout their marriage, June attempted to keep Cash off amphetamines, often taking his drugs and flushing them down the toilet. June remained with him even throughout his multiple admissions for rehabilitation treatment and years of drug abuse. After June's death, Cash believed that his only reason for living was his music. He died four months after she did.
While being hospitalized at Baptist Hospital in Nashville, Cash died of complications from diabetes around 2:00 am CT on September 12, 2003, aged 71—less than four months after his wife. He was buried next to her in Hendersonville Memory Gardens near his home in Hendersonville, Tennessee.