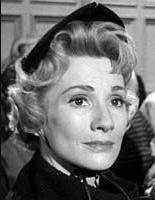 Katharine passed away on July 28, 1983 at the age of 66 in Los Angeles, California, USA. Katharine's cause of death was cancer.

Katharine Bard was an American actress who was born on October 19, 1916 in Highland Park, Illinois, USA. She was an actress, known for Suspense (1949), Playhouse 90 (1956) and How to Save a Marriage and Ruin Your Life (1968). How to Save a Marriage and Ruin Your Life is a 1968 film directed by Fielder Cook. It stars Dean Martin, Stella Stevens and husband and wife Eli Wallach and Anne Jackson.
She was married to Martin Manulis; they had three children. Martin Ellyot Manulis (May 30, 1915 – September 28, 2007) was an American television, film, and theatre producer. Manulis was best known for his work in the 1950s producing the CBS Television programs Suspense, Studio One Summer Theatre, Climax!, The Best of Broadway and Playhouse 90. He was the sole producer of the award-winning drama series, Playhouse 90, during its first two seasons from 1956 to 1958.

Manulis was married in 1939 to Katherine Bard, an actress and the daughter of Ralph Austin Bard, who served as Assistant Secretary of the Navy during World War II.
Katharine died on July 28, 1983 in Los Angeles, California, USA.