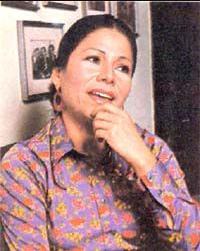 María passed away on May 1, 2015 at the age of 74 in Mexico City, Distrito Federal, Mexico. María's cause of death was stomach cancer.

María Elena Velasco Fragoso, known to the Mexican cinema as "La India María", was born on December 17, 1940 in Puebla, Mexico. Velasco's first film role was in the film, Ruletero a toda marcha (1962), as a nurse. She also appeared in another uncredited role in the film El rey del tomate (1963), which also starred Eulalio González. It was not until the film My Memories of Mexico (1963), that Velasco acquired her first credited role although it was minor. Other films Velasco starred in were Los derechos de los hijos (1963), El revólver sangriento (1964), and El bastardo (1968).In 1972, Velasco created a rural comic character named "La India María" for the TV series Revista musical Nescafe (1972). Her protrayal of La India María was such a success, that Velasco reprised her role of María in the comedy film Tonta tonta pero no tanto (1972). María Elena Velasco went on to star in 15 more films based on the prolific "India María" character, that she created. Overall, María Elena Velasco is noted for films of "La India María" and her film appearances during 1962-1968.