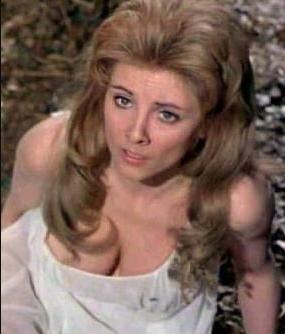 Luan Peters was born on June 18, 1946 in Bethnal Green, London, England as Carol Hirsch. She is an actress, known for The Flesh and Blood Show (1972), Land of the Minotaur (1976) and Not Tonight, Darling (1971).
Born as Carol Hirsch, she made her stage debut in a pantomime aged four, then went on to win a drama scholarship at age 16 after a performance of Twelfth Night. She started singing in a band for £2 a night as a way of earning extra money while attending drama school. Her singing career began in Manchester, where under the name Karol Keyes (named after her management Keystone Promotions), she fronted “Karol Keyes and the Big Sound”, a band previously known as “The Fat Sound”. One of her first records was an Ike & Tina Turner number called "A Fool in Love" on Columbia. She left that band in June 1966. A year later, she joined Joan Littlewood’s drama school at the Theatre Royal Stratford East.

She was also active on television in series such as: Z-Cars, Public Eye, Coronation Street (playing series regular Lorna Shawcross in 1971), Doctor Who (in the serials Frontier in Space in 1973, and The Macra Terror in 1967), Target, The Professionals, and the Fawlty Towers episode The Psychiatrist playing Raylene Miles, an Australian tourist. Her last known television role was in an episode of The Bill in 1990. In 2005 she was interviewed for the documentary Fawlty Towers Revisited.