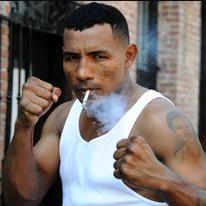 Ricardo is alive and kicking and is currently 48 years old.
Please ignore rumors and hoaxes.
If you have any unfortunate news that this page should be update with, please let us know using this .

Does Ricardo Mayorga Have the coronavirus?

Ricardo Antonio Mayorga Perez (born October 3, 1973), best known as Ricardo Mayorga, is a Nicaraguan professional boxer and mixed martial artist. In boxing he is a former unified WBA and WBC welterweight champion, and a former WBC light middleweight champion.
Mayorga first became well-known to boxing fans upon being featured on the cover of The Ring magazine's December 2003 issue, which read "The craziest man in the sport: Mayorga lights up boxing." He has since maintained this infamous reputation with his relentless trash-talk in the build-up to most of his fights, as well as his smoking and drinking habits outside the ring.

Mayorga decided to make a comeback as a boxer and won two fights in 2014, after over three-and-a-half years since losing to Miguel Cotto. He was then scheduled to rematch Shane Mosley in a fight on pay-per-view at The Forum located in Inglewood, California on August 29, 2015. Mosley would again defeat Mayorga, this time by KO in the sixth round.
In the aftermath of his loss to the aforementioned Cotto, Mayorga went on record to state that he doesn't entirely dismiss the possibility of a comeback. Sources close to him predicted that he would return to the sport to face Antonio Margarito in a bout that would've supposedly been dubbed: "When villains collide", with the winner earning themselves one final shot at being able to resurrect their career and the loser permanently retiring from boxing – a fight that would've entertained fans not only at a press conference, but also inside the ring as well.