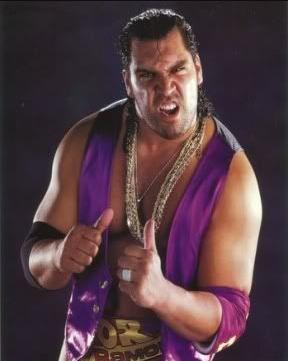 Richard Bognar (born January 16, 1970) is a retired Canadian professional wrestler. He is best known as the second Razor Ramon who debuted in the World Wrestling Federation as a replacement for the original man to use the Ramon gimmick, Scott Hall.
In September 1996, play-by-play announcer Jim Ross introduced Rick Titan as "Razor Ramon" and Glenn Jacobs as "Diesel" as part of a storyline mocking the departure of former employees Scott Hall and Kevin Nash. The storyline was also an attempt to turn Ross into a heel. However, the Jim Ross heel turn proved unpopular and was dropped almost immediately. On the October 20 episode of Superstars, Fake Razor defeated Bob Holly. On October 21, he scored an upset victory over Marc Mero on Monday Night Raw.

On the November 3 episode of WWF Superstars of Wrestling, Bognar and Fake Diesel defeated Barry Horowitz and Aldo Montoya. At Survivor Series (1996), Bognar teamed with Faarooq, Vader and the second Diesel to compete in a four-on-four Survivor Series tag team elimination match against Flash Funk, Jimmy Snuka, Savio Vega, and Yokozuna that ended in a no contest. on the December 8 episode of Superstars, Bognar and Fake Diesel defeated 2 jobbers. Bognar would also suffer losses to the likes of Savio Vega and Bret Hart. Bognar and Fake Diesel also defeated The Godwinns on an episode of Raw in January 1997.
On January 11, he wrestled in the main event of the second episode of WWF Shotgun Saturday Night as he lost to Rocky Maivia. Despite receiving a WWF Tag Team Championship match against Owen Hart and The British Bulldog at the In Your House 12: It's Time pay-per-view, the gimmick's television lifespan lasted only until the 1997 Royal Rumble. Bognar was the first one eliminated in the Royal Rumble match, when he was eliminated by Ahmed Johnson. Jacobs, meanwhile, was the last wrestler legally eliminated from the Royal Rumble match.
Titan appeared in the Honey, I Shrunk the Kids: The TV Show episode "Honey, Meet the Barbarians" as the "Meanest Barbarian" on February 6, 1998.