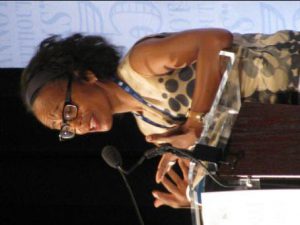 Robin is alive and kicking and is currently 57 years old.
Please ignore rumors and hoaxes.
If you have any unfortunate news that this page should be update with, please let us know using this .

Robin Givhan (September 11, 1964) is the fashion editor for The Washington Post. She left The Washington Post in 2010 to become the fashion critic and fashion correspondent for The Daily Beast and Newsweek. She returned to the Post in 2014. She won the 2006 Pulitzer Prize for Criticism, the first such time for a fashion writer. The Pulitzer Committee explained its rationale by noting Givhan's "witty, closely observed essays that transform fashion criticism into cultural criticism."