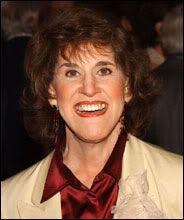 Ruth is alive and kicking and is currently 86 years old.
Please ignore rumors and hoaxes.
If you have any unfortunate news that this page should be update with, please let us know using this .

Ruth Ann Buzzi (born July 24, 1936) is an American comedian and actress of theatre, film, and television. She is especially known for her performances on the comedy-variety show Rowan & Martin's Laugh-In from 1968 to 1973, for which she won a Golden Globe Award and received five Emmy nominations.
Her first national recognition on television came on The Garry Moore Show in 1964, just after Carol Burnett was replaced by Dorothy Loudon on the series. She performed as "Shakuntala the Silent", a bumbling magician's assistant to her comedy partner Dom DeLuise, who played "Dominic the Great". Buzzi was a member of the regular repertory company on the CBS variety show The Entertainers (1964–65). In 1966–67, she appeared in Sweet Charity with Bob Fosse's wife Gwen Verdon in the original cast. She had several small roles, one of them "the Singing Fairy".

Buzzi had a successful nightclub act across the United States, including at Las Vegas's Sahara and at the MGM Grand hotels. She performed the act for one year. Her shows all sold out and she was reportedly offered an extended stay but declined.
She had featured roles in more than 20 films, including Chu Chu and the Philly Flash, Freaky Friday, The North Avenue Irregulars, The Apple Dumpling Gang Rides Again, The Villain, The Adventures of Elmo in Grouchland, and a number of westerns for the European market known as the Lucky Luke series in which she plays the mother of the Dalton Gang.
Buzzi lives with her husband Kent Perkins on a 600-acre (200 ha) cattle and horse ranch near Stephenville, Texas. She is a charter member of the Pasadena Playhouse Alumni Association. Buzzi paints as a hobby; she has never offered her oil paintings for sale to the public, but has donated original works to charity, where they have sold in excess of $6,000.