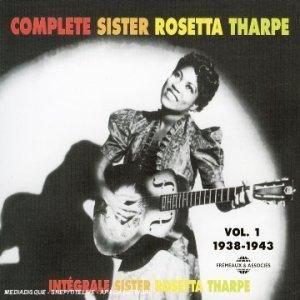 Sister Rosetta Tharpe was an American singer, songwriter, guitarist and recording artist. A pioneer of 20th-century music, Tharpe attained popularity in the 1930s and 1940s with her gospel recordings that were a unique mixture of spiritual lyrics and rhythmic/early rock accompaniment. She became gospel music's first crossover artist and its first great recording star, referred to later as "the original soul sister" and "the godmother of rock and roll". She was an early influence on figures such as Little Richard, Johnny Cash, Chuck Berry, Elvis Presley and Jerry Lee Lewis.