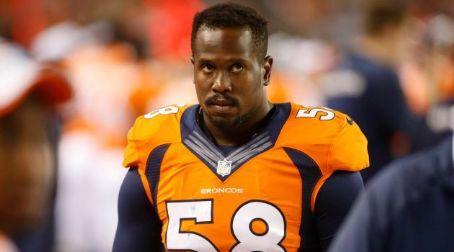 Von is alive and kicking and is currently 33 years old.
Please ignore rumors and hoaxes.
If you have any unfortunate news that this page should be update with, please let us know using this .

Does Von Miller Have the coronavirus?

Vonnie B'Vsean "Von" Miller Jr. (born March 26, 1989) is a professional American football outside linebacker for the Denver Broncos of the National Football League (NFL). Miller played college football at Texas A&M, where he earned consensus All-American honors and was awarded the Butkus Award as the most outstanding college linebacker in the nation. He was drafted by the Broncos second overall in the 2011 NFL Draft. He is a four-time Pro Bowl selection, receiving second-team All-Pro honors as a rookie and first-team All-Pro in his second season. At the conclusion of the 2015 NFL season, Miller was named Super Bowl MVP after the Broncos defeated the Carolina Panthers in Super Bowl 50.