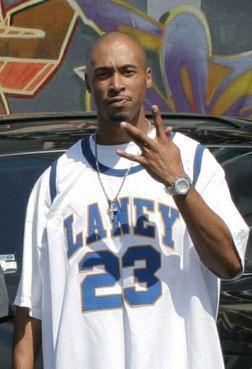 Young is alive and kicking and is currently 43 years old.
Please ignore rumors and hoaxes.
If you have any unfortunate news that this page should be update with, please let us know using this .

Does Young Maylay Have the coronavirus?

Young Maylay was born as Chris Bellard. He is an actor, known for Grand Theft Auto: San Andreas (2004), Grand Theft Auto: San Andreas - The Introduction (2004) and The Brodies (2014). Released his album "San Andreas: The Original Mixtape", inspired by his role in Grand Theft Auto: San Andreas on 5th July, 2005 under his own independent record label Malaynium Muziq.
Lench Mob Records were set in 2006 to put out Ice Cube's and WC's records, but later other artists were signed, like Young Maylay, who is considered a veteran by Ice Cube. DJ Crazy Toones created two blogs for Maylay, the first is called Who's Young Maylay? Mix Blog and the second is called Young Maylay, WC & Bad Lucc Mix Blog. Young Maylay is working on three albums, by himself, WC and Crazy Toones. Young Maylay is featured on two tracks by Ice Cube called Y'all Know Who I Am and Too West Coast on the album I Am the West. In 2010 Young Maylay was featured on two tracks on the album DJ Premier Presents Year Round Records - Get Used To Us. The track 'Temptation' is a solo performance while the track 'Ain't Nuttin' Changed (remix)' is a collaborative effort with Blaq Poet and MC Eiht.

Maylay was working in New York when he received a phone call from DJ Pooh, who was in a meeting with staff from Rockstar Games. They started a regular conversation about music which, unknown to Maylay, occurred on speaker phone. Rockstar staff heard the conversation, and after conversation between the two ended, they encouraged Pooh to bring Maylay in to audition. A few weeks after the audition, Rockstar reviewed the tapes and decided on Maylay for the role of the main character of Grand Theft Auto: San Andreas, Carl "CJ" Johnson.
OBG Rider Clicc is Young Maylay's rap trio (with Young Dre The Truth and Killa Polk) the group first appeared in Young Dre's album called Revolution In Progress The Movement with the single Let's Get The Game Bacc Right. and later appeared with Compton Cavie, Dresta and BG Knocc Out with the song Wes Indeed in the Cali Luv mixtape.