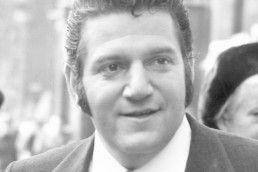 Allen passed away on July 4, 2009 at the age of 77 in New York City. Allen's cause of death was alzheimer's disease.

Allen Klein (December 18, 1931 – July 4, 2009) was an American businessman, music publisher, writer's representative, filmmaker and record label executive, most noted for his tough persona and aggressive, innovative negotiation tactics, many of which established higher industry standards for compensating recording artists. He founded ABKCO Music & Records Incorporated in 1961. While managing the Rolling Stones, he bought out the interests of former manager Andrew Loog Oldham, acquiring rights to all of the band's music composed before 1971, and after years of determined pursuit by the IRS was convicted of a misdemeanor charge of making a false statement on his 1972 tax return, for which he spent two months of late 1980 in jail. Though Klein was never proven to have participated in the scheme, Pete Bennett, head of promotion for ABKCO, had covertly and unlawfully sold copies of the Beatles and solo Beatles releases, including The Concert for Bangladesh.