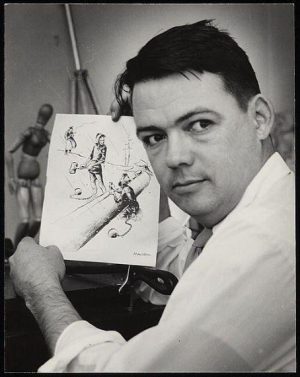 Though his brief onscreen career would consist solely of two film appearances, actor/writer Bill Mauldin's creation of G.I. Willie and G.I. Joe served to inspire battered soldiers in the dark days of WWII, while his novels inspired such films as Up Front and Back at the Front. Born in Santa Fe, NM, and educated at the Academy of Fine-Art in Chicago, Mauldin enlisted in the Army in 1940 and subsequently found his work published by Stars and Stripes. Mauldin won a Pulitzer for his editorial cartooning in 1945 and ultimately wound up working at The Chicago Sun Times in the early 1960s. It was here that Mauldin would create one of his most famous images following the assassination of John F. Kennedy, that of former president Abraham Lincoln grieving at the Lincoln Memorial. Stricken with Alzheimer's disease later in life, Mauldin would die of complications resulting from the ravaging condition on January 22, 2003. He was 81.