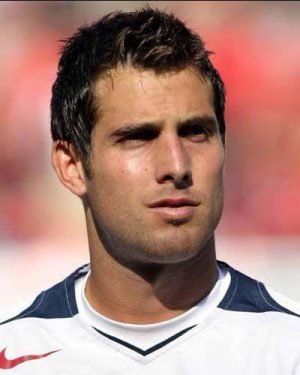 Carlos is alive and kicking and is currently 42 years old.
Please ignore rumors and hoaxes.
If you have any unfortunate news that this page should be update with, please let us know using this .

Does Carlos Bocanegra Have the coronavirus?

Carlos Manuel Bocanegra is a retired American professional soccer player. A two-time MLS Defender of the Year, Bocanegra also played professionally in England, Scotland, France, and Spain. He earned over 100 caps with the United States, serving as captain for six years. He currently is serving as technical director for the Atlanta MLS team that will join Major League Soccer in 2017.
Bocanegra was signed by Fulham in January 2004, quickly becoming a fan favorite, garnering the nicknames the Jackal and the Black Snake. With Fulham, Bocanegra played primarily as a center back, but also as a left back and briefly as a holding midfielder.

During the 2006–07 Premier League season, he was Fulham's second leading scorer with five goals, behind fellow American Brian McBride. On September 1, 2007, Bocanegra captained Fulham for the first time in a Premier League match, a come from behind 3–3 draw with Tottenham Hotspur. On September 15, 2007, he made his 100th appearance in the Premier League, all for Fulham, against Wigan Athletic. He was released by Fulham on May 23, 2008.
In the summer of 2013, Bocanegra left Rangers and signed with Chivas USA. Chivas USA traded up the allocation order with Toronto FC to land his signature, sending a first-round 2015 MLS SuperDraft pick and an international slot to the Canadian club. Bocanegra retired at the end of the 2014 MLS season.