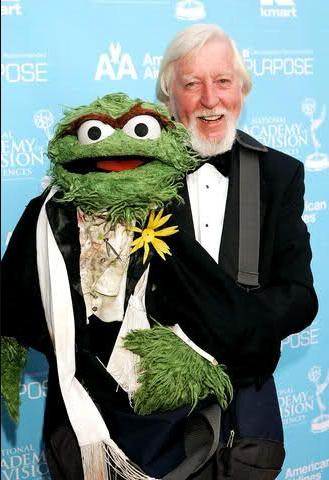 Carroll passed away on December 8, 2019 at the age of 85 in Woodstock, Connecticut, USA. Carroll's cause of death was complications from dystonia.

Caroll Edwin Spinney (born December 26, 1933) is an American puppeteer and cartoonist, most famous for playing Big Bird and Oscar the Grouch on Sesame Street. He has sometimes been credited as Carroll Spinney or Ed Spinney.
Spinney first met Jim Henson in 1962 at a puppeteering festival, where Henson asked if he would like to "talk about the Muppets". As Spinney failed to realize the question was an employment offer, the conversation never came to pass.

In 1969, Spinney performed at a Puppeteers of America festival in Utah. His show was a mixture of live actors and puppets but was ruined by an errant spotlight that washed out the animated backgrounds. Henson was once again in attendance and noticed Spinney's performance. "I liked what you were trying to do," Henson said, and he asked once more if they could "talk about the Muppets". This time, they did have the conversation, and Spinney joined the Muppeteers full-time by late 1969.
Spinney had three children from his first marriage to Janice Spinney, whom he married in 1960, and has four grandchildren. Spinney and Janice divorced in 1971 after eleven years of marriage. Spinney was married to his second wife, Debra Jean Gilroy, from 1979 until his death. In his later years, Spinney had dystonia, a neurological movement disorder that causes muscle contractions.