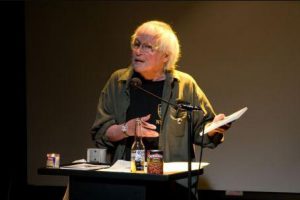 David Meltzer (born February 17, 1937) is an American poet and musician of the Beat Generation and San Francisco Renaissance. Lawrence Ferlinghetti has described him as "one of the greats of post-World-War-Two San Francisco poets and musicians." Meltzer came to prominence with inclusion of his work in the anthology, The New American Poetry 1945-1960.