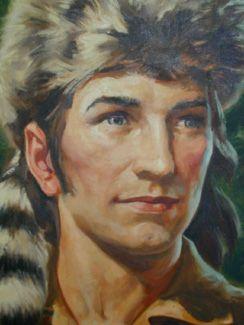 Davy passed away on March 6, 1836 at the age of 49 in San Antonio, Texas, USA. Davy's cause of death was execution at The Alamo.

Davy Crockett, born in Greene county, Tennessee, on the 17th of August 1786. His education was obtained chiefly in the rough school of experience in the Tennessee backwoods, where he acquired a wide reputation as a hunter, trapper and marksman. In 1813-14 he served in the Creek War under Andrew Jackson, and subsequently became a colonel in the Tennessee militia. In 1821-24 he was a member of the state legislature, having won his election not by political speeches but by telling stories. In 1827 he was elected to the national House of Representatives as a Jackson Democrat, and was re-elected in 1829.
At Washington his shrewdness, eccentric manners and peculiar wit made him a conspicuous figure, but he was too independent to be a supporter of all Jackson's measures, and his opposition to the president's Indian policy led to administration influences being turned against him with the result that he was defeated for re-election in 1831. He was again elected in 1833, but in 1835 lost his seat a second time, being then a vigorous opponent of many distinctively Jacksonian measures.

Discouraged and disgusted, he left his native state and emigrated to Texas, then engaged in its struggle for independence. There he lost his life as one of the defenders of the Alamo at San Antonio on the 6th of March 1836; probably he was one of six executed after the battle.
All that is certain about the fate of David Crockett is that he died fighting at the Alamo on the morning of March 6, 1836 at age 49. According to many accounts, between five and seven Texans surrendered during the battle, possibly to General Castrillon. Santa Anna had ordered the Mexicans to take no prisoners, and he was incensed that those orders had been ignored. He demanded the immediate execution of the survivors, but Castrillon and several other officers refused to do so. Staff officers who had not participated in the fighting drew their swords and killed the unarmed Texians.