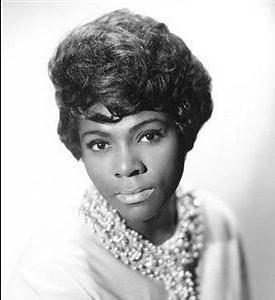 Delia Mae Warrick, known as Dee Dee Warwick (September 25, 1942 – October 18, 2008) was an American soul singer. Born in Newark, New Jersey, she was the sister of Dionne Warwick, niece of Cissy Houston and the cousin of Whitney Houston.
Dee Dee Warwick sang with her sister Dionne Warwick and their aunt Cissy Houston in the New Hope Baptist Church Choir in Newark, New Jersey: eventually the three women formed the gospel trio the Gospelaires, who often performed with The Drinkard Singers, Houston being a member of both groups.

Warwick continued to record for Mercury through the late 1960s. Although her occasional success in the R&B field—notably the 1969 Ed Townsend production of Foolish Fool—was enough for the label to wish to re-sign her in 1970, she signed with Atco at the invitation of Atlantic Records president Jerry Wexler himself, Wexler's having admired Warwick's early session work.
Warwick made her first recordings for Atco in February 1970, cutting four tunes with Townsend. In an early indication of the disarray that Warwick's career would experience at Atlantic, these tracks were shelved and she was sent to Criteria Studios in Miami in April to work with producer Dave Crawford and fast-emerging studio band, The Dixie Flyers. The resultant Turning Around album yielded a Top Ten R&B hit with "She Didn't Know", but Warwick would never have another album release or single in the R&B Top 20.
In October, she cut 10 tracks at Muscle Shoals, again with Crawford producing (along with Brad Shapiro). Only three singles were released with one, a remake of "Suspicious Minds", becoming Warwick's final R&B hit in 1971. That summer, Crawford and Shapiro produced an eight-track session for Warwick at the Pac-Three studios in Detroit. One track, "Everybody's Got to Believe in Something" was issued as a single - Warwick's last release on Atco despite two final sessions for the label in early 1972. Reflecting on her unrewarding Atco tenure, Warwick opined: "The problem was simply, that the company had a lot of other big female acts - like Aretha [Franklin] and Roberta [Flack] - and you get into a situation, where you don't get the right kind of material or production or promotion..."
Dee Dee struggled with narcotics addiction for many years and was in failing health for some time. Her sister was with her when she died on October 18, 2008, in a nursing home in Essex County, New Jersey, aged 66.