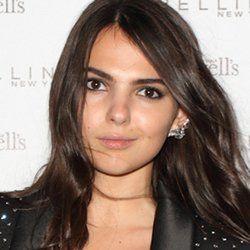 Doina is alive and kicking and is currently 28 years old.
Please ignore rumors and hoaxes.
If you have any unfortunate news that this page should be update with, please let us know using this .

Doina Ciobanu (Дойна Чобану, born 20 April 1994, Chișinău, Moldova) is a London-based fashion blogger turned model. Described as having one of the strongest personal brands in the United Kingdom’s fashion industry, as well as being one of the “biggest influences” upon it, Ciobanu has modeled and collaborated with a list of luxury fashion brands that includes Agent Provocateur, Burberry, and Versace.Professional career Ciobanu launched her fashion blog The Golden Diamonds in 2010 while living in Moldova. While residing in Moldova, Ciobanu turned down a university placement at the Sorbonne in Paris to pursue a full-time career in fashion.Moving to London in 2014, she scouted and signed with Kate Moss’ former manager as a digital influencer in the same year, shortly before being signed globally by Next Model Management as both an influencer and fashion model, the first Moldovan to do so and the first digital influencer to be signed by Next's London division. In London she worked beyond her platform on The Golden Diamonds, acting as a correspondent and writer for publications such as Byrdie and Elle, and public speaking at events such as WGSN Futures Awards, the Festival of Marketing and Web Summit. Her mix of online presence and that of a social event presence in London, soon saw her labeled as a part of "the super blogger legion" and a "mega-blogger". Her mix of offline and online work saw her recognized as one of the top 19 Young Entrepreneurs of Romania by Forbes, twice as one of Romania’s most influential fashion icons, and twice for 'Best Personal Style' by Elle.First modeling in Moldova, Ciobanu's management teams transitioned her work to include modeling on a larger scale as of 2015. She subsequently fronted campaigns for luxury brands including Agent Provocateur, Bobbi Brown, Burberry, Degrisogno, Dior, Fendi, L’Oréal, Jimmy Choo, Paul Smith, and Versace.Her style and, separately, her modeling work have seen her featured in print in titles such as Elle, Glamour, Harper’s Bazaar, Marie Claire, Tatler, The Telegraph, and international editions of Vogue. Ciobanu has also attracted the attention of men’s press, ranking amongst the AskMen’s Top 99 women of 2016, being labelled amongst "the most beautiful" bloggers by GQ Mexico, and becoming a regular in the British edition GQ, oft-featured as their ‘Hottest Women of the Week’ and at their social events.Personal life Ciobanu was born in Chișinău, living there till she was 19 before moving to Bucharest and subsequently London.Having turned down a position at the University of Paris, Ciobanu corresponded to complete a long-distance bachelor's degree in Political Science and History from the Free International University of Moldova instead.Based in London, she maintains an interest in politics in Moldova and has stated that she would return there to be active in it. Ciobanu speaks English, Romanian and Russian, and is currently learning French and Spanish.