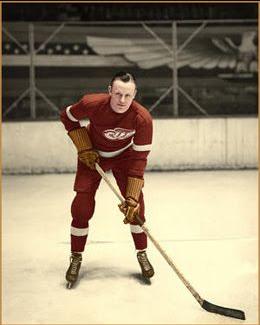 Ebenezer Robertson "Poker Face" Goodfellow, "Ebbie" for short, (April 9, 1906 – September 10, 1985) was a Canadian professional ice hockey player and coach. Goodfellow played in the National Hockey League (NHL) for fourteen seasons with the Detroit Red Wings from 1929 to 1944 as both a forward and defenceman. Goodfellow helped the Red Wings win three Stanley Cups, back to back in 1935–36 and 1936–37, and another in 1942–43. He was captain of the Wings for five seasons, until 1942 when he was succeeded by Syd Howe. Goodfellow also won the NHL's Hart Trophy (MVP) for the 1939–40 season. Goodfellow was the first Red Wing to receive this award and one of only four Red Wings in history to win the Hart; the other three being six-time winner Gordie Howe, Sid Abel (1949) and Sergei Fedorov (1994). After retiring from playing, Goodfellow coached in the American Hockey League (AHL) and later with the Chicago Black Hawks of the NHL.