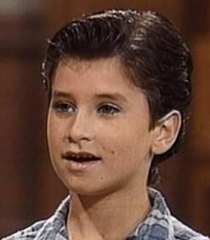 Edan is alive and kicking and is currently 44 years old.
Please ignore rumors and hoaxes.
If you have any unfortunate news that this page should be update with, please let us know using this .

Does Edan Gross Have the coronavirus?

Edan Gross (born 1978) is a former child actor. He appeared in many guest spots on many popular television programs in the 1980s and 1990s including Cheers, Murphy Brown, The Golden Girls, Empty Nest, Newhart, Highway to Heaven, Married… with Children, Northern Exposure, and Herman's Head. He was also featured as a regular on the short-lived sitcoms Sweet Surrender (NBC, 1987), Free Spirit (ABC, 1989–1990) and Walter & Emily (NBC, 1991–1992).
Additionally, Gross was the voice of the Good Guy dolls in Child's Play, the "Corky doll" from the Cricket doll series, the title character of the animated series Little Dracula, Flounder on the animated series The Little Mermaid and Waif in the computer game Return to Zork.

He also voiced Tyrone Turtle on Tiny Toon Adventures, Christopher Robin on the Christmas special Winnie the Pooh and Christmas Too, Merton on the ABC Weekend Special Runaway Ralph, Bitsy on the Yogi Bear special Yogi's Great Escape and did various voices on The Ren and Stimpy Show, TaleSpin, Pound Puppies, ProStars, Timeless Tales from Hallmark, Superman and Wally on the television special The Halloween Tree.
He was the President of 3TAC Distribution, Inc. from December 17, 2013 until its dissolution on April 1, 2016.