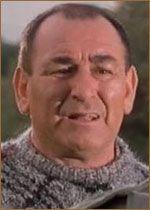 Eduard Peročević, better known as Edo Peročević (December 3, 1937 in Sarajevo, Kingdom of Yugoslavia – April 28, 2007 in Zagreb, Croatia) was a Croatian actor, best known for the role of the ticket collector in the 1976 children's movie Vlak u snijegu (English: Train in the snow).