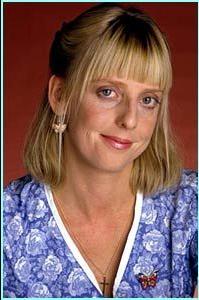 Emma G. Chambers (born 11 March 1964) is an English actress. She is best known for playing the role of Alice Tinker in the BBC comedy The Vicar of Dibley and Honey Thacker in the film Notting Hill.
Chambers was born on 11 March 1964, in Doncaster, the daughter of John Chambers, a consultant obstetrician and gynaecologist, and his wife Noelle, née Strange. She attended St. Mary's School and her secondary education was at St Swithun's School, Winchester, Hampshire. She then trained at the Webber Douglas Academy of Dramatic Art in the 1980s, where she was a classmate of actor Ross Kemp.

Chambers was married to fellow actor Ian M. Dunn. Before their marriage, she lodged with Ian McKellen, whom she regarded as "a sort of father figure". She had a chronic allergy to animals, and suffered from asthma.
On 21 February 2018, Chambers died from "natural causes". The proximate cause of death was a heart attack, possibly related to her severe allergies.
On 26 February 2018, BBC One aired The Vicar of Dibley episode "Love and Marriage" in Chambers' memory.