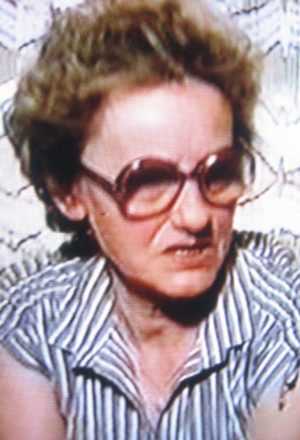 Erna Wallisch (10 February 1922 – 16 February 2008) allegedly was a female guard in two Nazi concentration camps, but despite several trials was never convicted, mostly due to a complete lack of evidence or any indication of wrongdoing. Yet, In 2007, she was seventh on the Simon Wiesenthal Center's list of most wanted war criminals that had never been convicted.
Wallisch first served as a guard at Ravensbrück concentration camp for a year before she was transferred to the Majdanek concentration camp in Lublin Poland. While in service at Majdanek, she met a Nazi guard named Georg Wallisch, and married him in 1944. It is alleged that she was a brutal guard, beating women and children on their way to the gas chambers and personally participated in the selections of inmates to be executed. Survivors described pregnant Wallisch beating a young boy to death. One of the survivors mentioned: "The sweating, breathless face of that monster was something I will never forget."

In 2007, author and journalist Guy Walters tracked Wallisch down to a small flat in Vienna, Austria, as part of his research for an upcoming work titled Hunting Evil, about the pursuit of escaped Nazi war criminals. Though Wallisch would not talk to him and the Austrian government claimed that the statute of limitations had expired on her war crimes, Poland explored seeking an indictment against her.
Though they had investigated Wallisch for her crimes in the 1970s, the renewed interest as well as evidence from Polish survivors, lead Austrian officials to commission a report on the crimes which had taken place six decades earlier. Before the report could be completed, the 86-year-old Wallisch died in a hospital bed.