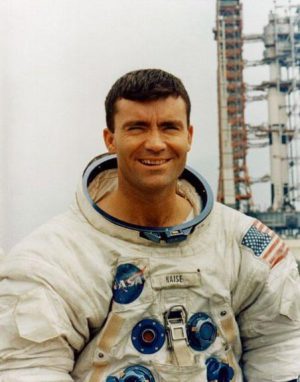 Fred is alive and kicking and is currently 88 years old.
Please ignore rumors and hoaxes.
If you have any unfortunate news that this page should be update with, please let us know using this .

Fred Wallace Haise, Jr. (/ˈheɪz/ HAYZ; born November 14, 1933) is an American aeronautical engineer, former naval aviator, fighter pilot, test pilot, and NASA astronaut. He is one of only 24 people to have flown to the Moon, having flown as Lunar Module Pilot on Apollo 13. He was to have been the sixth person to land and walk on the Moon, but the mission had to be aborted due to a spacecraft failure. He went on to fly Space Shuttle Approach and Landing Tests in 1977, and retired from NASA in 1979.