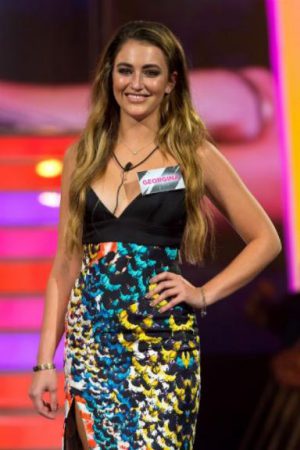 Georgina is alive and kicking and is currently 32 years old.
Please ignore rumors and hoaxes.
If you have any unfortunate news that this page should be update with, please let us know using this .

Georgina Leigh Cantwell(born May 26, 1990, age 27) is a British actress, model, dancer, entertainer and reality television personality from Kent. Before Big Brother, Georgina appeared in the E4 series Taking New York. She entered the Main House on Day 1. On Day 9, Georgina discovered she was nominated for the first eviction, however she survived this on Day 11. On Day 13, she won immunity from the next eviction after the Housemates and the Others went head-to-head. She was nominated for a second time on Day 21, this time to face the third eviction. On Day 25, she was evicted after receiving most votes to evict. Georgina briefly returned to the House on Day 47 as part of a task.